Buying a Taboun in Yarka

A little over a week ago we were back at Beit Baad Alzitun in Pe’kin to pick up some more of their fantastic olive oil when we noticed a nice, but rusty taboun (domed pita grill).  The owner of the Beit Baad gave us the name and phone number of the nearest taboun manufacturer and assured us that all we needed to do was ask anybody in Yarka where “Abu Taib” is and they would point the way……

We had been to Yarka a few times in the past. Yarka is a Druzi city with a good sized population, not a place where you would think that everybody knows everyone else.  But our optimism, desire for adventure and yearning for home cooked pita had us driving  into Yarka the following day. 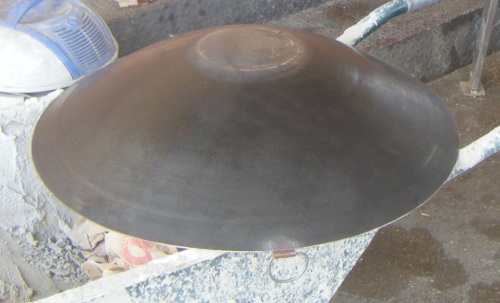 Yarka is a good sized city, but there is only one main road through it, and even that road is much like an alley in some places.  We drove through about half of Yarka before we found somebody to ask directions of.   He was an old Druze with a pleasant smile, long white mustache and bright blue eyes.  We rolled down the window and asked, “Eyfo Ha Hanut shel Abu Taib shel tabounim?” (“Where is Abu Taib’s store for tabouns?”) hoping that we pronounced the name properly.  He didn’t know Abu Tiab.  The Beit Baad man was wrong – not good.  We repeated, “Abu Taib” and “taboun” hoping he would make the connection.  The old Druze asked, “Abu Saib?” and “saboun?”, making the whole experience even more perplexing.

Fortunately, there was a younger, astute Druze watching the scene and came to lend a hand.  Once again we asked, “Eyfo Abu Taib?” thinking for sure he will know Abu Taib.  Nope, the other guy didn’t know Abu Tieb.  We presented to him our Beit Baad Alzitun business card with Abu Tieb’s name and number on the back.  Sensing our confusion, he calls the number on the card and informs us that we need to go to Pe’kin near Ma’alot.   “No, no – that’s the beit baad we know where that is!  Flip the card over to Abu Tieb” we exclaimed.  After a couple attempts he finally got through to Abu Tieb and got the directions to his “factory”.  Not wanting to leave us stranded, this friendly Druze drove ahead and lead us to Abu Tieb’s home / workshop making certain we were at the correct place before leaving us. 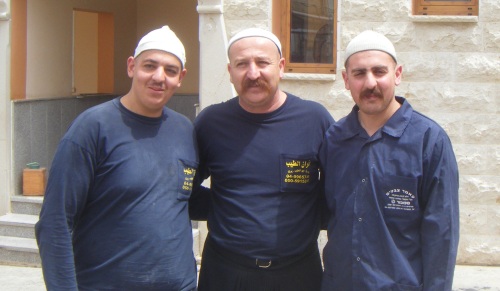 Pictured with his sons, employees and probably housemates (sharing a HUGE house) is Abu Tiab in the middle and is his oldest son Tieb to the right, and his other son to the left.  “Abu” means father and since his oldest son is Tieb – that becomes his name “Father of Tiab.”   What his name was before Tieb was born will be a mystery until we meet him again.

Time for Drinks to Celebrate the Sale

Bargaining was fun with Abu Tieb – he told me the price, and I counter-offered.  He told me he didn’t understand me and told me the price again, and I counter-offered again.  This happened a few times, until finally he understood and accepted my counter-offer – except he was 10 NIS short to meet my price.    On the way out of his shop there was a stack of pita spatulas.  I grabbed one, called for Abu Tieb who was walking ahead, and gestured that this spatula would be in lieu of the 10 NIS .  Abu Tieb liked this proposal. 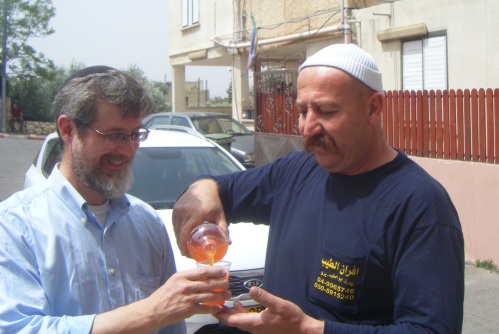 Abu Taib an I

After the sale, any sale, drinks must be poured!  Being short on time, we refused the cafe im hell (coffee with hell – cardamon) and the tea but settled for Fanta Orange Soda and water.   Abu Tiab took great joy in serving the drinks and posed with each member of the family while he poured.

One response to “Buying a Taboun in Yarka”